This article was adapted from Todd Bates’ press release.

Overfishing likely did not cause the Atlantic cod, an iconic species, to evolve genetically and mature earlier, according to a study led by Drs. Malin Pinsky and Bastiaan Star.

“Evolution has been used in part as an excuse for why cod and other species have not recovered from overfishing,” said Malin. “Our findings suggest instead that more attention to reducing fishing and addressing other environmental changes, including climate change, will be important for allowing recovery. We can’t use evolution as a scapegoat for avoiding the hard work that would allow cod to recover.”

The study, which focuses on Atlantic cod (Gadus morhua) off Newfoundland in Canada and off Norway, appears in the journal Proceedings of the National Academy of Sciences.

Many debates over the last few decades have centered on whether cod have evolved in response to fisheries, a phenomenon known as fisheries-induced evolution. Cod now mature at a much earlier age, for example. The concern has been that if the fish have evolved, they may not be able to recover even if fishing is reduced, according to Pinsky.

Both theory and experiments suggest that fishing can lead to an earlier maturation age. But prior to the new study, no one had tried to sequence whole genomes from before intensive fishing to determine whether evolution had occurred. So, this team sequenced cod earbones and scales from 1907 in Norway, 1940 in Canada and modern cod from the same populations. The northern Canadian population of cod collapsed from overfishing in the early 1990s, while the northeast Arctic population near Norway faced high fishing rates but smaller declines.

The team found no major losses in genetic diversity and no major changes that suggested intensive fishing induced evolution, suggesting that we focus on managing for more direct threats (e.g., overfishing, environmental change) than for evolution.

This study prompts future investigations to see if other species, especially those with shorter lifespans (in contrast to cod), do or don’t show signs of evolution.

Zoë Kitchel, PhD Candidate, led a group of Pinsky Lab members (Jeewantha Bandara, Jaelyn Bos, René Clark, Dan Forrest, and Malin Pinsky) in reviewing Ocean Recovery: a Sustainable Future for Global Fisheries? by Ray and Ulrike Hilborn, available online early in Fisheries. The review mentions that the book serves as a needed contrast to the many doom-and-gloom stories and headlines of impending fisheries collapse by highlighting where fisheries are working well, but doesn’t fully expound the challenges to achieving and maintaining sustainable fisheries (e.g., climate change).

Drs. Lauren Rogers, Robert Griffin, Talia Young, Emma Fuller, Kevin St. Martin, and Malin Pinsky collaborated on a paper which seeks to understand how climate change will likely affect the fishing opportunities for 85 communities in New England and the Mid-Atlantic. The team integrated climatic, ecological and socio-economic data to identify where strategies for adapting to the ecological impacts of climate change will be most needed. They used 13 global climate models to project how ocean temperatures are likely to change, then examined ocean temperatures and types of bottom habitat to determine where important commercial fisheries species are likely to move. They also looked at whether the species caught by fishing communities are likely to become more or less abundant in the ocean regions where they typically fish.

Read more about the paper from the news outlets below:

Dr. Becca Selden discussed climate change as an emerging issue for fisheries in front of the House Subcommittee on Water, Oceans, and Wildlife (WOW) on May 1, 2019.  The clip of her testimony is here. Her written testimony, and the video of the entire hearing on the State of Fisheries can be found on the WOW website.

We hear almost every day in the news about environmental disasters, but the world is also full of many environmental success stories. Why do we succeed at conservation some of the time, but fail other times? In our paper, we studied people’s decisions about whether to conserve or to over-harvest a renewable resource like fish or timber. Surprisingly, we found that people often get trapped by their past decisions. If they start out over-harvesting, they tend to continue over-harvesting. But the opposite is also true: once people start conserving, this behavior is also self-perpetuating. We built a mathematical model for this behavior, and showed that it explains global patterns in fisheries decisions better than any previous theory.  Our results challenge the conventional expectation that collapse of fast-growing resources is unlikely, but also offer hope that conservation is much easier to continue once we start. Reuters released the results of a more than year-long investigation into climate change, fish, and fisheries called Ocean Shock that we supported throughout. The data in their visualizations are from OceanAdapt and their summer flounder story builds from our NSF-funded Coastal SEES research with Kevin St. Martin, Bonnie McCay, Eli Fenichel, and Simon Levin. We’re all excited to see Mo Tamman and the rest of the team’s wonderful storytelling and science communication skills brought to bear on this important issue! Our paper in Science out today, “Preparing ocean governance for species on the move” is available here or in Spanish here.

Jim, Becca, and Malin’s paper, Projecting shifts in thermal habitat for 686 species on the North American continental shelf, was published in PLOS ONE last week (and featured in their Climate Change Channel). The paper details how species’ habitat will shift to cooler waters in the face of climate change. 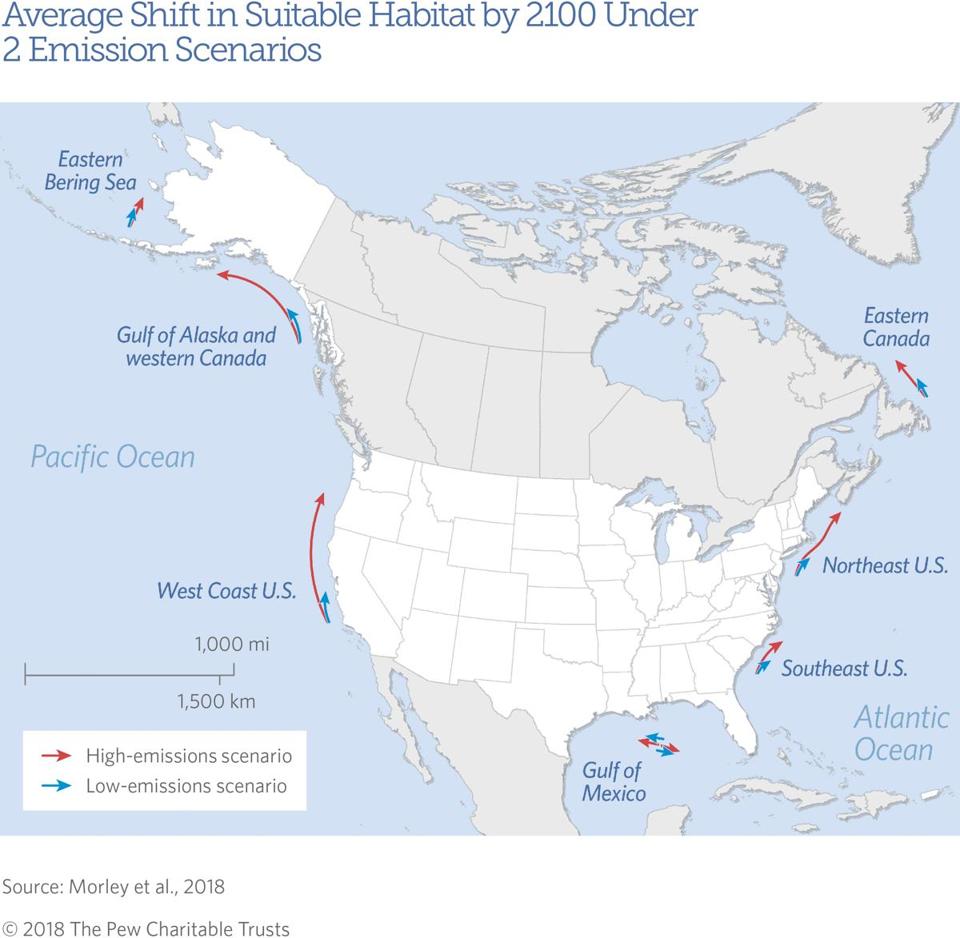 Check it out at: The ocean is changing. As it changes, the ecosystem and the species within the ocean are impacted, sometimes in surprising ways. This is a story about how some of those changes—in temperature, where fish populations live, and the fishing communities that rely upon them—could play out along the Atlantic Coast in the next century. It’s also a story about making predictions and using evidence from data. Here’s how it’s going to work: